Condition: Goran’s teeth were decayed, broken, ground down to the gum-line, and he had a deep overbite. He reported having multiple infections, and needing to take antibiotics to contain them.  On smiling, he displayed too much gum, and due to severe grinding (nocturnal bruxism), his teeth were very short. If Goran had decided to restore his teeth, he would’ve required gum surgery (crown lengthening) and multiple crowns, coupled with individual implants to replace his back teeth.

He’d lost all faith in his teeth & didn’t want to entertain the idea of restoring them. His uncle had wanted All-on-4 (4 implants), but his dentist recommended six implants instead of four. Goran had spent a considerable amount of time researching his options and after much consideration he decided that All-on-6 (6 implants) was the best option for him.

Procedure: upper and lower all-on-6 with both upper and lower zirconia bridge upgrades. Goran also wears an occlusal splint of a night time to protect his new teeth from grinding. Condition: The first thing that Barry said to me was “I’ve always been scared of the dentist”. Barry’s fear had prevented him from attending regular visits to the dentist; this resulted in multiple missing teeth, and poorly fitting teeth. He was struggling with his dental health and finally gathered the courage to do something about it.

Barry had a deep bite with a reverse relationship between upper and lower front teeth.

To correct Barry’s overbite and reverse the relationship between his upper and lower teeth, an upper removable bridge was chosen, which was supported by the strength of a titanium framework. Barry was initially hesitant with the removable option as he wanted fixed teeth. After explaining that a removable prosthesis is unlike a conventional denture, in that, it doesn’t move in the mouth during eating and has the advantage that it can be removed for cleaning. Barry felt assured and decided to proceed with this option. In the lower jaw, Barry had an All-on-4 fixed acrylic bridge reinforced with a titanium bar and supported with four implants.

The upper jaw was fitted with All-on-6 with a fixed/removable bridge. Both bridges are acrylic, upgraded with titanium bars. Condition: Brad spent his whole life caring for others, but in doing so, neglected his own teeth. He told us he could not eat or speak comfortably anymore; he’d had enough and wanted a set of strong, nice looking teeth. He said he wanted “A second chance in life”.

Brad had been wearing an ill fitting upper denture, and his remaining teeth were loose and decayed.

An opportunity arose whereby Brad could focus on his oral health; he decided it was time to replace his decayed and broken teeth.

Procedure: After an initial assessment, Brad decided to go for upper and lower All-on-4. His remaining teeth were removed on the day of surgery, and were replaced with four implants in the lower jaw. During the surgery, it was necessary to add an additional 5th implant on the upper right hand side to increase the stability of the bridge. Despite increasing the stability; the implants weren’t tight enough on the day to provide Brad with immediate, fixed teeth. Instead Brad had to wear an upper removable denture with a lower fixed all on 4 bridge for 5 months until sufficient bone had healed around the implants and stabilised them adequately. With adequate bone, we could safely anchor an All-on-5 full upper bridge, 5 months later.

Both upper and lower arches were upgraded to titanium reinforced acrylic bridges. Condition: Elvira had suffered through years of problems with her teeth; large fillings were used to repair many of her fragile teeth. Over the years Elvira had tried to maintain and repair her teeth, evidenced by numerous failing crowns and broken teeth. However, after loosing several teeth Elvira was unable to eat properly and decided on upper and lower All-on-4 implants.

Elvira also had a gummy smile, when she smiled she displayed a lot of gum, while she’d grown accustomed to this appearance, she didn’t like it.

Procedure: Under General Anaesthesia (GA), Elvira had all her top and bottom teeth removed and replaced with immediate upper and lower All-on-4 implants. Her gummy smile was surgically corrected, before implants were inserted. She returned the following day for her fixed upper, temporary bridge. However, just like Brad, we needed to wait four months until her implants firmly integrated with her lower jaw before we could provide her with a fixed bridge. Elvira is constantly telling us how much easier it is to eat with her new teeth and how many compliments she gets from her friends on her new smile.

Elvira continues to use her Upper and Lower All-on-4 dental implants with upgraded titanium reinforced bridges. Initially the bridges were made entirely from acrylic, and subsequently 4 zirconia teeth were added for extra strength to make them hybrid acrylic/zirconia bridges. Condition: Robert presented with teeth severely worn down, to his gum line. He was no longer able eat comfortably, and wanted to “start all over again” with his teeth. Robert had done his research, was interested in All-on-4 and was ready to proceed with his new teeth.

We were faced with a couple of challenges when it came to restoring Robert’s teeth. Firstly we had to minimise the risk of his new teeth breaking due to him grinding his teeth at night. Secondly, Robert was a smoker. Smoking impacts negatively on post-surgical healing, and consequently the success rates of implants. Robert assured us that he would stop smoking before surgery.

After viewing Robert’s 3-D scans, we detected several cysts in his upper jaw caused by ongoing teeth related infections. These cysts had to be removed before implants could be placed in the upper jaw.

Procedure: Under General Anaesthesia, Robert had his remaining top and bottom teeth and cysts removed, 4 implants were then placed immediately in the lower jaw. Five months later, he was ready for five implants to be placed in the upper jaw.

Five months later, Robert was ready for his final teeth. Due to the high grinding forces, Robert had a fixed acrylic bridge with titanium reinforcement in the lower jaw with acrylic a fixed/removable denture in the upper jaw. The upper denture is very firm but he is able to remove it for cleaning and at night to reduce the damage from the grinding forces. He also wears an occlusal splint at night to further minimise the damage from grinding.

It took Robert some time to get used to his new teeth as he’s almost forgotten what it was like to have teeth. Although Robert’s treatment took some years, with the need for multiple surgeries, the difference is evident in his new smile. 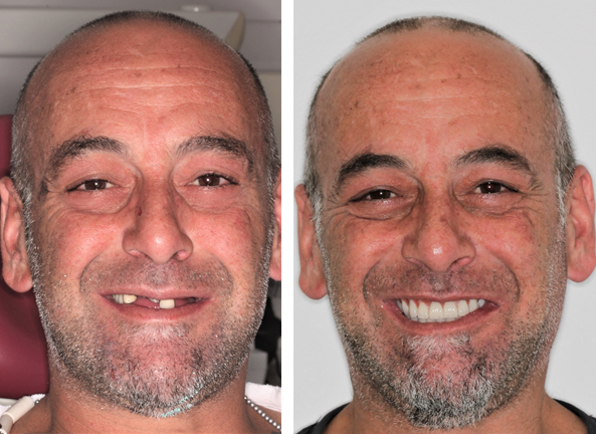 Condition:  Sotirios presented with multiple missing teeth in the upper jaw. He only had a few teeth remaining and wanted to replace them all with fixed implants, he knew his remaining teeth couldn’t be salvaged. A family friend had All-on-4 implant surgery a few years prior and mentioned how happy he was with the result. This was all the encouragement Sotirios needed, he was determined in proceeding with All-on-4 implants..

Procedure: Under General anaesthesia, Sotirios had his top teeth removed and replaced with 4 implants. They anchored well on the day so he was able to return the following day for his new but temporary upper bridge. The new teeth in 1 day made an enormous difference to his smile. Although he had to eat soft foods for five months until implants fully integrated, time passed very quickly, and Sotirios was now able to enjoy all sorts of food with his new upper titanium reinforced acrylic teeth. In the lower jaw, Sortirios decided to have his teeth whitened and have a partial removable denture. 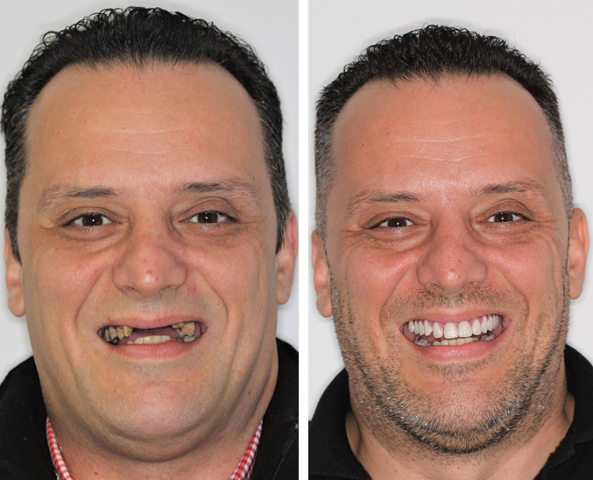 Condition: When he first attended, Goran told us that one of his front teeth chipped when he was 11. One thing led to another, and over the years the remainder of his teeth had deteriorated, leaving only a few remaining teeth.

As with many other patients who seek full mouth implants, Goran suffered from caries (decay) and nocturnal bruxism (night grinding). Whatever teeth were left in his mouth were severely worn and couldn’t be saved.

Procedure: Goran’s remaining teeth were removed while he was asleep and 6 implants were placed in the upper jaw as well as 4 implants in the lower jaw. Goran returned the following day for his temporary bridges, which he wore for five months. The temporary bridges were replaced with definitive upper titanium reinfused acrylic bridge, and a lower titanium/acrylic bridge on 4 implants. Because of his grinding, Goran wears an occlusal splint (grinding guide) to protect his new teeth and implants from fractures.

Goran has been thinking about implants for many years, he can finally eat and smile again. Condition: When we met Nick, he told us that he was fed up with his discoloured, fragile teeth. He couldn’t eat well, and his bottom front teeth were loose. He was generally uncomfortable with the condition of his mouth and didn’t like gum recession. He was considering having his teeth removed and replaced them with All-on-4 implants.

Nick tried to look after his teeth over the years, evidenced by numerous large fillings in his mouth, making them fragile. At the time Nick smoked but was aware of the effects of smoking on dental implants, so he was contemplating quitting.

After a thorough analysis, to Nick’s surprise, it was determined that there was enough tooth structure to save his top teeth. Instead of replacing them with implants, an easier, cheaper and more durable option was to strengthen them with crowns and to replace the existing bridge. Unfortunately, the lower front teeth were too loose to be saved, so they had to be replaced with implants.

Procedure: The upper teeth were strengthened with a combination of porcelain veneers, crowns and a zirconia bridge. This gave Nick and immediate smile make over. His lower front teeth were removed, followed by implant replacement 3 months later, couple with a few veneers to make the front six teeth look spectacular.

Nick is a perfect example of a spectacular smile transformation without the need for radical measures. A conservative approach was taken instead. Nick tells us how many compliments he’s had about his new smile, and how surprisingly natural his teeth look. 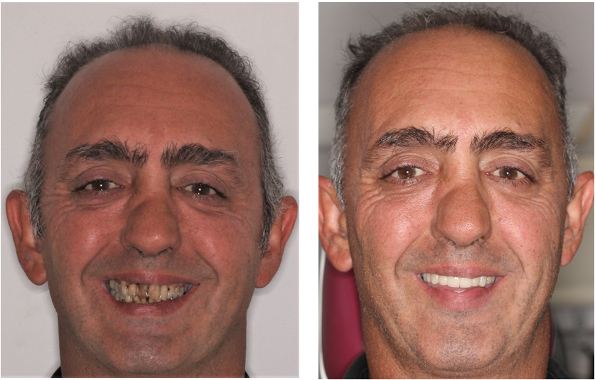 Condition:  Michel had a car accident 30 yrs ago, resulting in an injury to the left side of her face, requiring considerable dental treatment. Just like Nick, Michel was adamant that she would require dental implants to replace her teeth. She wanted a long term solution that would last her for many years to come. Her other wish was whiter and brighter teeth.

Again, it was decided that the best long term approach for Michel was to keep her own teeth as they were still in a great condition but, but 30 year old crowns and bridges needed revamping.

Procedure: Old crowns and bridges were replaced with new porcelain crowns and zirconia bridges. The new smile line was established in harmony with Michel’s upper lip and the teeth were made straight and white just as Michel requested.

It took some convincing for Michel to go with the recommendation to save her natural teeth instead of replacing them with implants, but now Michel is thrilled with her new teeth. She tells us that she found the process not exactly a walk in the park, and she felt tired after the long preparation appointment but it was all worth it in the end. Michel feels compelled to share her experience with others and educate them about the process. 10. Can you see yourself in the top ten smile transformations?

Contact Dr Helen for a tailored consultation and discuss the opportunities available to you. Start your journey to a new smile and a new you today. 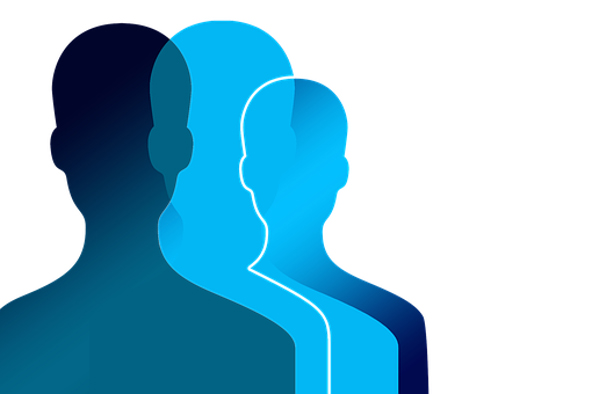 ← The Cost of Dental Implants Do we really need dairy for healthy teeth? → “I will take care of you from beginning to end, ensuring you get the best possible outcome.”